Spring4Shell – What You Need to Know

Since the release of a proof-of-concept (PoC) exploit for a Remote Code Execution (RCE) in the Spring Framework by a Chinese security researcher (later removed from on GitHub due to Chinese legal issues) there has been a lot of conflicting information running around. CVE-2022-22965, AKA Spring4Shell was immediately associated to Log4Shell due to the similarity in the method of exploitation. As time went by, it became evident that the Spring4Shell vulnerability requires quite a few preconditions to be in place for a successful exploitation. That has spurred a debate among security researchers around how likely it is that real-world applications are affected by the vulnerability and how common those vulnerable applications are.

An older similar issue was exploited and patched in the past (CVE-2010-1622), however, Spring became vulnerable again when used by JDK9+.

In this blog post we will try to lay out the facts we know now and highlight the important aspects security practitioners and leaders should know in order to address the vulnerability.

In contrast to Log4Shell, in order to exploit the Spring4Shell vulnerability:

The Apache Tomcat software is developed in an open and participatory environment and released under the Apache License version 2.

The Spring Framework is an open-source application framework that provides infrastructure support for developing Java applications.

In Spring Boot, the controller class is responsible for processing incoming REST API requests, preparing a model, and returning the view to be rendered as a response.

The controller classes in Spring are annotated either by the @Controller or the @RestController annotation.

In this exploit example, the  `run_exploit` function makes a HTTP POST request that uses the “Classloader Manipulation” attack vector to achieve a Remote Code Execution (RCE) on a Spring application which is deployed on an Apache Tomcat server. 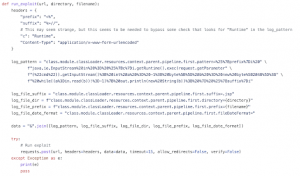 The url variable should contain the following string ‘<domain_name>:<port_number>/<application_name>’.

The data variable contains the ClassLoader fields which are filled with the payload information:

After running the HTTP POST request, the attacker receive a shell on the Apache Tomcat server by requesting the following:
http://localhost:8080/shell.jsp
With a cmd parameter that can be any command!

For example:
http://localhost:8080/shell.jsp?cmd=whoami
Will print the username.

In order to successfully exploit the vulnerability these Conditions have to be met:

A few open source tools have been released aimed at detecting vulnerable Spring4Shell components. See for example here and here.

Upgrade to the following patch releases:

These mitigations can help reduce the probability of exploits, however, it should be considered as a temporary solution until you are able to upgrade Spring to a non-vulnerable version.

We will update this post as we continue to analyze the potential attack surface and exploitability of the vulnerability. The Dutch National Cyber Security Center (NCSC) has also published a resource list that should update over time with information about vulnerable applications and detection tools.