CVE-2022-37958 is a vulnerability in the SPNEGO NEGOEX security mechanism in Windows released by Microsoft on the 13th of September 2022 with a CVSS score of 7.5.

However, on December 13th a few interesting events around the vulnerability occurred: 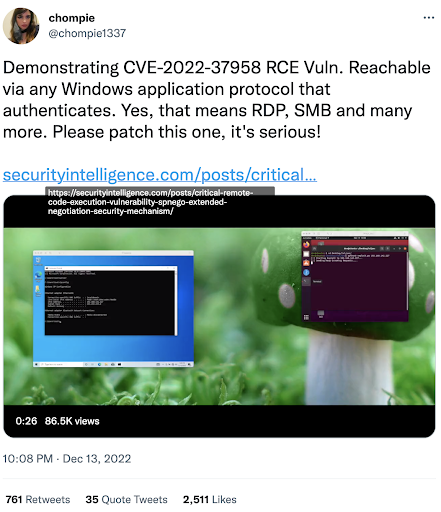 Apparently these events are connected to each other and the reason why Microsoft reclassified the vulnerability is because the Red Hat security researcher Valentina Palmiotti (chompie1337), proved that the vulnerability can lead to a Remote Code Execution.

To understand the vulnerability better, let’s cover some basic concepts.

The GSSAPI is provided by security vendors in a form of libraries that can be used to develop an application. Every application that wants to use a security mechanism, will use a vendor independent GSSAP. Then, if it wants to replace the security implementation, it will need to be rewritten.

The SPNEGO is a GSSAPI pseudo mechanism that negotiates the choice of security technology for client-server softwares.

It is used when a client application wants to connect to a remote server, however, it does not know in which authentication protocol the server supports.

The SPNEGO determines what common GSSAPI are available in each side(the client and the server), selects one and then dispatches all further security operations to it.

Microsoft Application Protocols that use SPNEGO

The list is not full and other protocols can be discovered that are using the SPNEGO mechanism.

NEGOEX, which stands for Extended Negotiation, enhances the SPNEGO capabilities.

When NEGOEX is selected by SPNEGO, the process of the negotiation is not only based on the fact that both the client and the server supports the security mechanism, it adds a pair of meta-data messages for each negotiated security mechanism.

The meta-data contains information about the security mechanism’s trust configurations and thus the SPNEGO is more flexible when using the NEGOEX.

Is a Critical pre-authentication Remote Code Execution vulnerability that impacts a wide range of protocols and can potentially be wormable.

When the NEGOEX is enabled, an attacker can use any Windows application protocol that uses authentication and via the protocol, access the NEGOEX protocol and execute code remotely.
The vulnerability is rated as Critical in all categories except for the “Exploit Complexity” which is rated as high due to the fact it takes few attempts to successfully exploit the vulnerability.

You will be affected by the vulnerability if the following conditions are met:

In order to remediate the vulnerabilities, you should apply the latest Microsoft updates that have been released since the 13th of September. Here is the link to the September 13th Microsoft patch.